About a third of Switzerland’s land is devoted to agriculture production, and with the Alps running right through the middle of the country there’s inevitably a lot of farm work required on Swiss mountainsides. Alpine farming and the maintenance and upkeep of the mountains are a big part of the Swiss economy – from milk, cheese, and chocolate production, right through to the heights of the tourism industry – Switzerland depends heavily on those peaks and their conservation.

Admittedly, that’s a rather odd way to begin a post on a telecoms, contact center, and customer service company’s blog.

However, Bucher + Suter’s headquarters are in Switzerland… So, there’s that?

Tenuous segues aside, what business do I have writing about Swiss farming? Before the launch of the Bucher + Suter PLUS program and our commitment to Pledge 1%? I would have had no business at all. But we’re on unfamiliar territory – and that’s exactly how we like it!

For those who missed our announcement, Bucher + Suter recently joined the Pledge 1% movement and committed to giving up 1% of our time, products, and profit to good causes – both local and international.

Our CEO, Martin Wüthrich, said at the time:

“At Bucher + Suter, giving back to communities and charities has been a part of our company culture for some time. By confirming our support to Pledge 1% and kicking off the Bucher + Suter PLUS Program, we are solidifying our commitment to being a socially responsible and philanthropic organization.”

As part of our promise to commit 1% of our time, Martin and the management team have given every Bucher + Suter employee two days per year of volunteer time off (VTO), which they can use as they choose (within reason) to give back to their communities or philanthropic projects they’re passionate about.

We in the marketing team skipped straight to the front of the queue and began looking for some team opportunities to spend 1 of our two days together. A day away from the (home) office? SIGN US UP!

Part 1: VTO and how it began

Caritas Switzerland is a multidisciplinary, mutual assistance, charitable organization that sets out to help people in need in Switzerland and abroad. Through their “Mountain Farm Action” program, they provide respite for Swiss mountain families in need with corporate events (single-day) and individual volunteer programs (running from weeks to months). In turn, they offer volunteers an altogether unique experience in the Swiss countryside, doing work that, while strenuous, is simultaneously rewarding, eye-opening, and team-building. They also make it very straightforward to sign up for their programs and have a quick turnaround for opportunities, which helped us in our decision-making. We were eager to get out there!

After a nail-biting drive up the side of the practically cliched looking Niesen mountain… via single-track roads… with passing places spread out every few hundred meters, we were already sweating by the time we reached the summit. “This seems crazy! How much further is it possible to climb? Who would want to live here?”. My reactions to the drive played on repeat until we reached our destination, and we poked through the clouds and into another world. Switzerland is beautiful. We all know that! But if you’re a city bumpkin like many of us working the office life, it can occasionally take you by surprise. The views from the Alp-hut, where the family we’d be helping live from May through September, taking care of their cattle, making cheese, and looking after nature, were frankly breathtaking!

We were met by our guide, Stefan, and rushed into what felt like a steam bath to catch the final part of their morning ritual. Robes remained on as we watched Stefan’s wife, together with a volunteer who was there to help for the summer and another who was two weeks into a three-week stay, hand straining curds and pressing cheese into huge organic wheels. Pretty freaking awesome. We were offered the leftover warm milk out of a witch’s cauldron and when put on the spot, trepidatiously tried it. Again, pretty awesome. Awfully straightforward this mountain life so far. Obviously, however, this was not the start of their day. We missed milking because it was 8.30 when we arrived, and we were undoubtedly still cozily sleeping in our sheltered, city existence when these troopers were getting up and making sure Switzerland had enough raw materials for the cheese and chocolate it’s so dependent on. After a tour of the humble Alp-hut and a caffeine injection – we headed out into the fields and got to work. 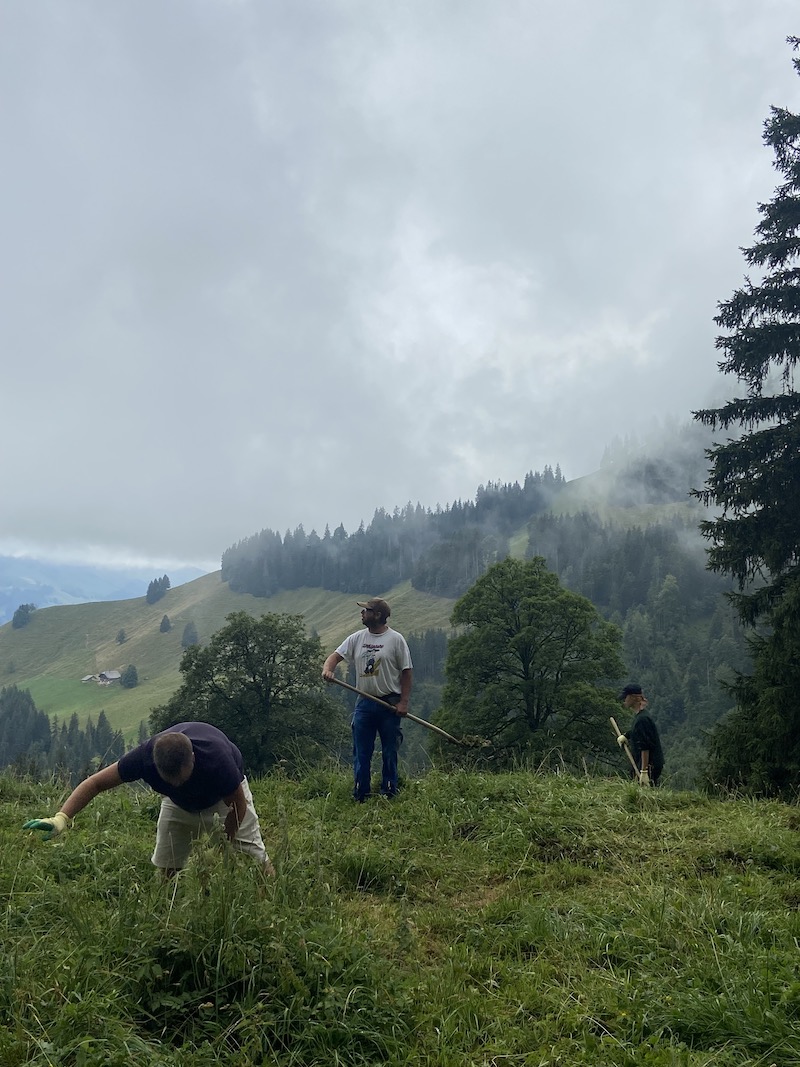 Not for us, the manicured farm tour – “we’re happy to do it all,” we declared. We very quickly found our bravado was challenged. The first task was to move through the field and redistribute cow-poop that was so dense it was preventing the grass from growing. To this day, I’m not sure if it was just a test of what we’d be willing to do. But we did it! For two whole hours. Slinging poops with a shovel into random directions and trying to avoid each other. But it wasn’t bad, and we enjoyed spending time understanding Stefan’s mountain lifestyle, and he indulged us as we talked about contact centers, Webex, and the future of CX. If it wasn’t for the smell, it would have even been quite fun. 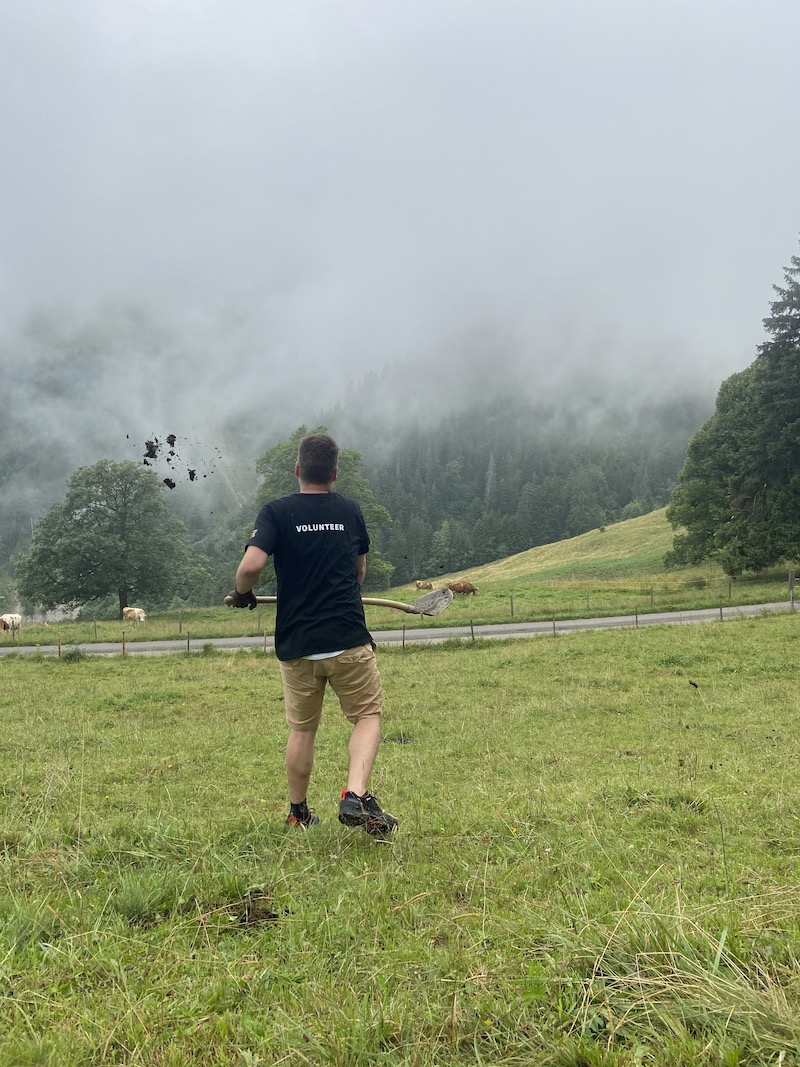 When lunch was called, sweat was pouring freely from my body, and I could feel my shovel weighing heavy in my hand. Maybe I’d been trying too hard – perhaps I’m pathetically ill-equipped for manual labor, the result of a highly bone-idle lifestyle. We’ll never know!

We refueled with a traditional and delicious Älplermagronen. A perfect combination of pasta, potatoes, bacon (veggie option also available), cheese, and cream. It’s beyond me why the combination of pasta and potatoes isn’t used more. D-E-L-I-C-I-O-U-S! 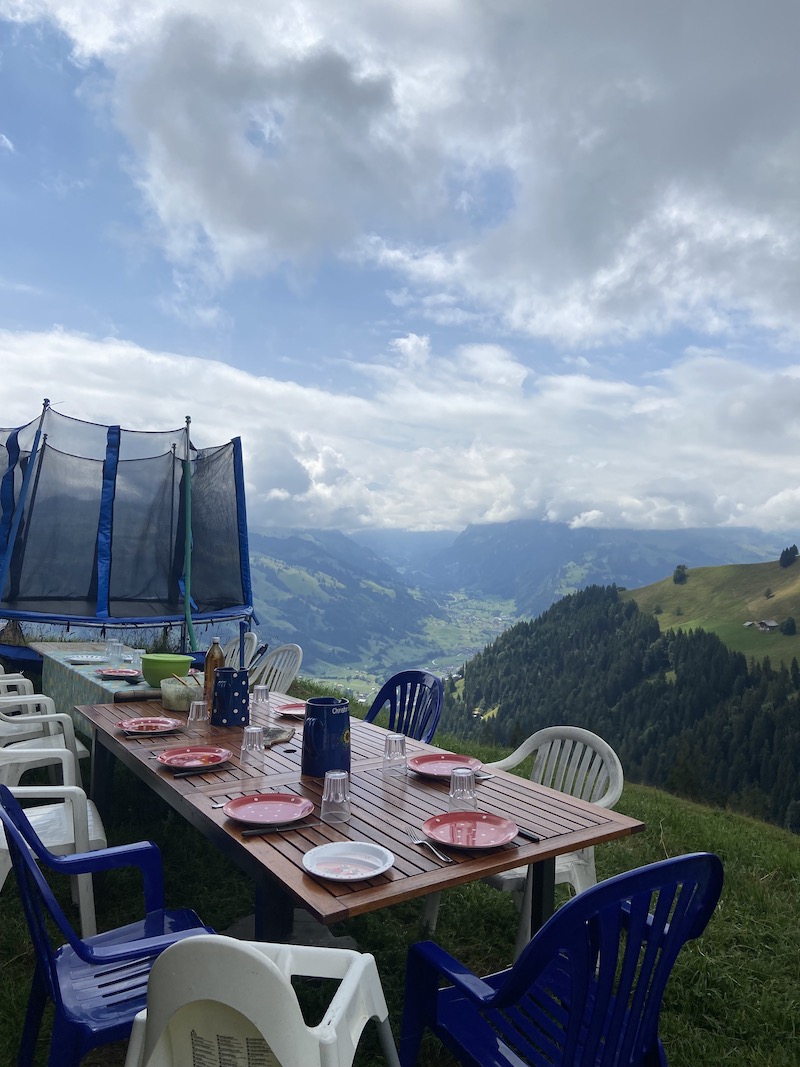 We shared stories with the family, and they explained the importance of what they do. It really isn’t just about the milking of cows and making of cheese. At the end of WW2, Switzerland’s economic isolation policies meant that the government had to intervene in the market and provide big subsidies to the agriculture industry to ensure a continued high level of Swiss production. Those policies changed slightly over the years, and subsidies have become more concerned with services committed to the public interest—the upkeep of mountain roads, paths, fences, and the overall well-being of the mountainside. And as we were about to find out, some grueling work would be required.

Lunch concluded, we grabbed some tools, a 2-meter long 25cm wooden (or maybe lead) post and packed them into a couple of farm cars. We drove for about 10 minutes, got out in the middle of the forest, and shuffled down a vast incline through nettles, brambles, and over barbed-wire fences. I’ve never been to Navy SEAL school, but I could only imagine it’s easier than what we were doing. The ease with which Stefan, a man in his 50s and packing some timber, traversed the rough terrain and didn’t blink an eyelid in the face of thorny bushes and angry horse flies was awe-inspiring. And if that sounds patronizing – it shouldn’t. I was falling to pieces – my t-shirt could have been wrung out and filled a bucket. At one point, I thought I would pass out if I didn’t get to sit down with some water.

It should be noted that it wasn’t even a particularly warm day. We’d managed to miss the heatwave. But take me back to my comfy desk chair, Salesforce, Pardot, and Webex, I thought.

After our 3-hour (read: 15 min) trek, we got to work on tearing out an old fence along the side of the Niesen Bahn – the funicular railway that takes people to the mountain’s peak. We erected new fence posts and spent time removing toxic but quick-spreading flora from the cow’s mountain pastures. Too much of these yellow flowers and the cow’s milk becomes unusable. How the cows got here, I dared not imagine. Helicopter perhaps.

We cleared away the old fence and began our ascent back up the hillside. At different points, we were crawling through the dirt on all 4’s, carrying the old fence on our backs. Again – SEAL school but with tools and old metal fencing rather than artillery.

When we reached a road, our guides volunteered to collect the cars, which was good because I’m pretty sure they’d have had to leave me anyway.

Back up the road to the Alp hut for a nice cold, well-deserved beer, 3 liters of water, and a beautiful assortment of cheese and Swiss Zöpfe bread. Was it a relief to be on stable ground? Was it a connection formed with people whose paths we rarely crossed? Was it the coming together of our team to do something not involving marketing or communications? Probably all 3, but my goodness, did it feel good!

We purchased some of the family’s organic cheeses to take back to our loved ones and said our goodbyes. There were mixed emotions as we came back down the mountain. They ranged from hysterical laughter at the thought of how inept we were, to the “never-again”s, to the “wow, we really did something cool,” and “it was good for us.”

It’s been three days since we returned from the mountain for our PLUS day, and, on reflection, all our emotions were accurate.  My wrists still hurt from yanking at fences and trying to tug out random nettles that I probably wouldn’t recognize again today. It was fun, it was tough, and it was educational, but ultimately we all came away with the feeling that we’d done some good: a small amount, but more than we would have done this time last year. Which I guess is the essence of Pledge 1%. I asked Stefan about our contribution, and he admitted that while he would have been faster with 5 of him, rather than 1 of him and 4 of us, his work was made more enjoyable and faster because we were there. Not five times faster – for sure – but quicker, nonetheless.

Pledge 1% brings people together towards a common and achievable goal. Which is a perfect metaphor for what we did on the mountain. 1% by its very nature isn’t a huge amount, but it adds up, and it adds up quickly. And I speak for the whole marketing department when I say how grateful we are to be allowed to connect with such a great program!

Ultimately, the outcomes weren’t just for Stefan and his family but also for us. Taking us out of our comfort zone, learning about unfamiliar but essential systems, and tightening our team bonds. Long live VTO. Long live the Bucher + Suter PLUS program! 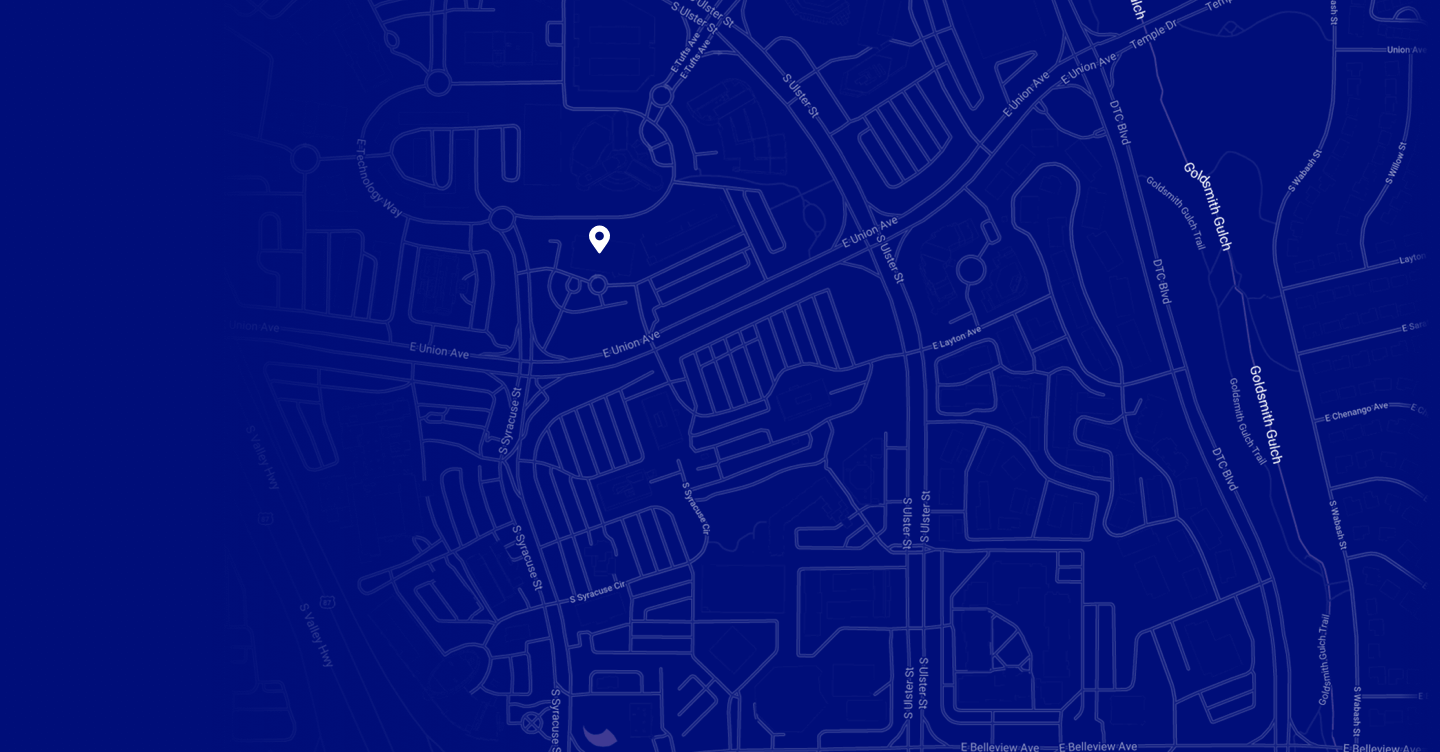 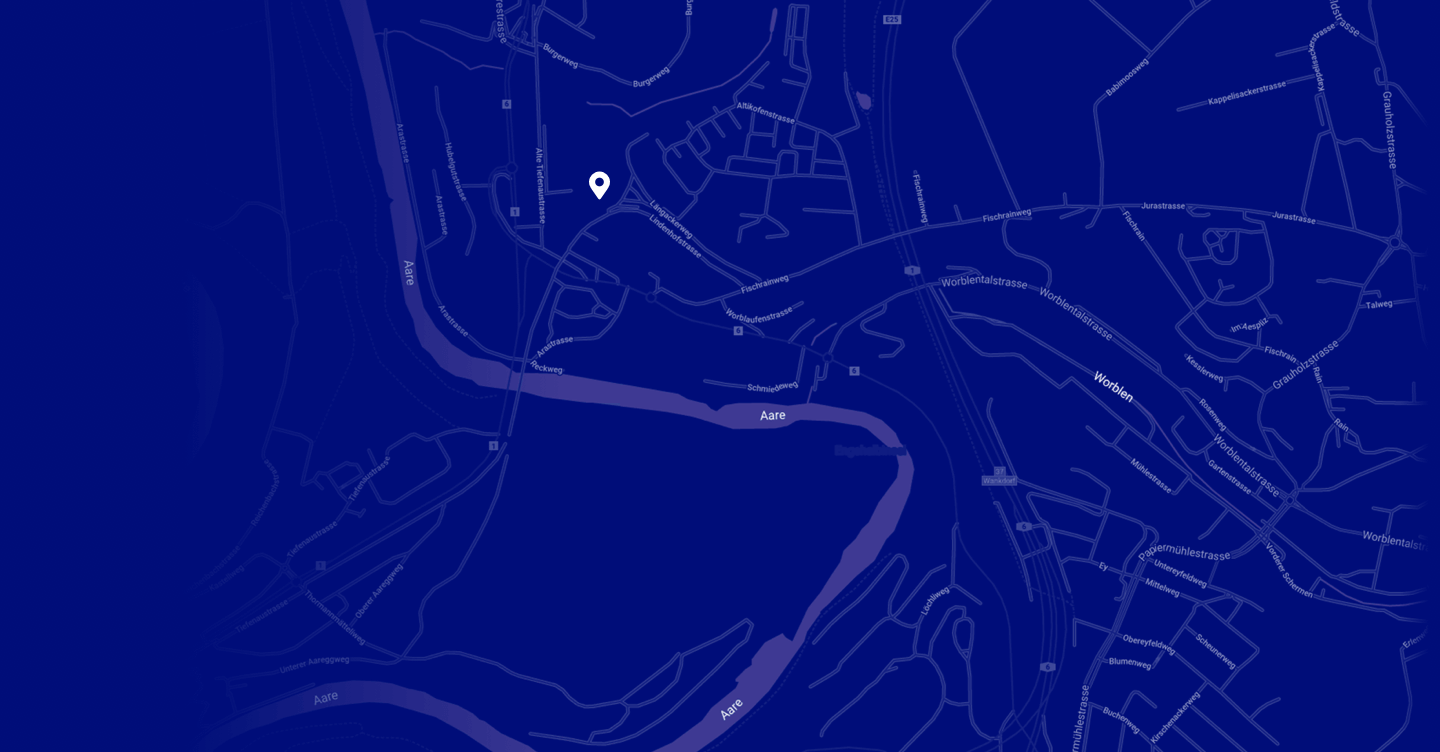 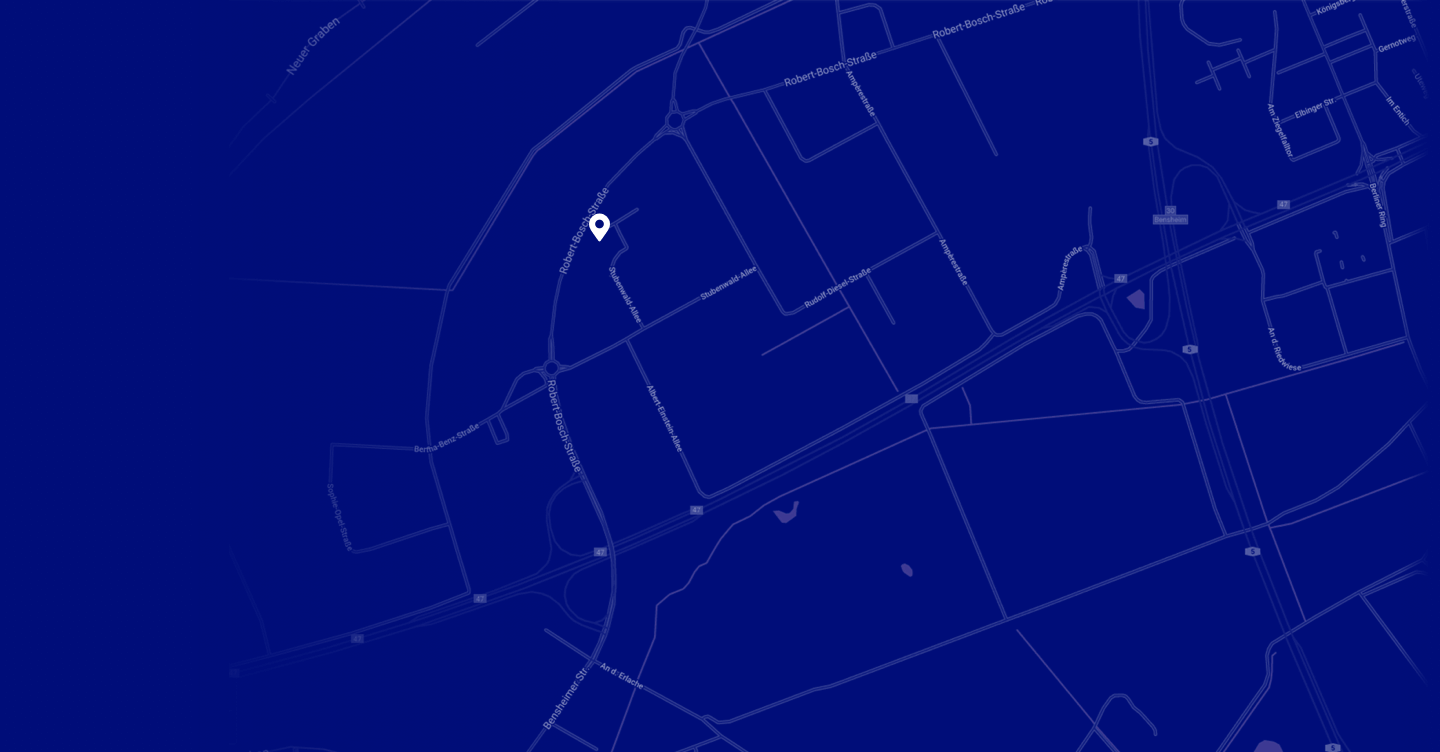